The Viola Forest (ヴィオラ森, vioramori?) is a small forest located at the northernmost tip of the Wings of Horus, right on the outskirts of Karulu Village. The forest itself takes its name from one of Ar Ciel's moons: the Viola Moon, similarly how the Cello Forest takes its name from the Cello Moon.

This is the forest in which Lyner Barsett crashed at the beginning of the events in Ar tonelico: Melody of Elemia, and as such, the first place to which he arrived during his adventures. Here, Aurica Nestmile saved his life by singing a healing song, but she went away, dropping her handkerchief when she saw Lyner beginning to regain consciousness.

Later on, Lyner had a discussion with an strange man, Jack Hamilton, who tried to get some pieces from his crashed airship to sell, and he also later on learned how the people of Karulu Village were trying to sell his ship as scrap to pay their contract to Tenba. However, with Jack's help, he managed to gain the trust of the villagers, and thus, they began guarding his airship until he could return and repair it.

The forest is only visited later on when Krusche Elendia begins valuating the possibilities of repairing it, but after a quick check-up, she says that it isn't possible unless Lyner had an exorbitant sum of money available.

However, when Lyner and his companions began searching for a method to cross the Blastline to rescue Shurelia, they returned to the airship's crash place, and now that Krusche had enough time to give it an exhaustive analysis, she discovered that the airship only needed a few replacement parts in order to fly again. Thus, with the help of Tenba, the Teru Tribe and the Church of El Elemia, the party managed to repair the airship, and rode it to the topmost floors of the Tower.

As described above, the Viola Forest is the very first area in which the players can control Lyner, and as such, it also serves as a mini-dungeon of sorts for players to familiarize themselves with the game controls and base form of the battle system. It also has a very basic layout, containing very few dead ends and treasures. However, despite its extreme lack of difficulty due to the enemies never changing, it's necessary to return here a few times for plot advancement reasons, and to find a Talk Topic late in the game. 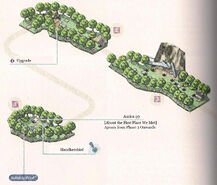 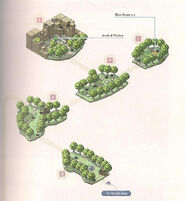 Viola Forest Map 2
Add a photo to this gallery

Retrieved from "https://artonelico.fandom.com/wiki/Viola_Forest?oldid=13663"
Community content is available under CC-BY-SA unless otherwise noted.