Lyner Barsett and his friends arrived at this place to climb the Tower back to the Rinkernator in order to awaken the Tower Administrator, Shurelia. However, Krusche Elendia had gotten the word that they had begun climbing before her, so she destroyed the door leading to this place and began climbing to reunite with the others. Lyner tried to operate the shuttle that was right before the stairs, but it proved to be useless, as the most of the Tower's Symphonic Power was down. Upon entering the stairs, Jack Hamilton and Radolf Schnaizen remarked on how the atmosphere had changed, while Lyner guessed it was because they were close to the Tower's center.

After climbing for a while, Jack screamed he was tired of climbing, and prompted Lyner and the others to rest for a little while. During this short break, the party began wondering what was the point of building such a large tower, while Lyner voiced his thoughts on that it was too advanced to be created by the humans, and that its creators must have had some strong feelings. Aurica Nestmile then wondered if these were good intentions, but Lyner told her to not worry, as since Shurelia and the Tower's wills are synonymous, these couldn't be bad intentions. Jack then noted on how peaceful Shurelia seemed in her sleep, and that she didn't look like the Tower Administrator in that state. Radolf then told the party it was enough rest, and asked them to continue their climb to catch up with Krusche.

A few floors above, they met up with Krusche, who was surprised to see them behind. Lyner explained that she was given wrong information, while Krusche explained on how she was about to give up and apologized for not coming with the party to save Shurelia. She was now free because the projects in which she was working over at Tenba had been transferred to other engineer, and asked where Misha was. Lyner explained then that Mir was still alive, and that Misha was getting ready in the Crescent Chronicle to reseal her as soon as the Tower was reactivated. Krusche then told Jack she had to tell him something, which caused him to freak out and ask her for more time to pay off his debt. Krusche laughed, saying she wasn't going to ask about that, but also thanking him for reminding her that she should charge him late fees. She then told him to take good care of Misha. Lyner then advised the party to continue their climb.

Some floors later, Lyner told the party to rest once more. During this time, Krusche asked Aurica why she was so silent all the time, to which Radolf replied she actually used to be much quieter than now, and that she had changed quite a bit. Jack then asked her about her past, to which Aurica replied she came from Skuwat Village. This left Jack astonished, adding he was stationed there as part of Tenba's temporary troops, and telling her she was lucky to have survived that battle. Aurica replied it was because she was out of the village at the moment. Jack explained then that said battle was caused by Bourd Rade kidnapping Misha, which made the Teru pursue him, and both of their forces engaged in battle in that place, completely destroying the village. Aurica then added that after the battle, she boarded a refugee airship and went to live in Nemo, while noting how much of a coincidence that she, Jack and Misha had been in Skuwat at a point, and that they all might have ended meeting each other there.

They then continued their climb, until they finally reached the exit to the SPU, prompting Jack to exclaim in relief that there weren't any more stairs, and Lyner to wonder how far they had come.

This sector of the Tower is pretty much a long series of stairwells, and it doesn't have much in the way of features. There are a few treasures and monsters in this place, but none of them are available during the first visit, requiring a second visit after the Tower has been reactivated and Shurelia awakened. 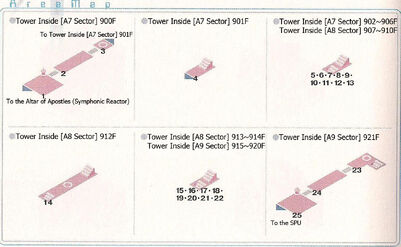 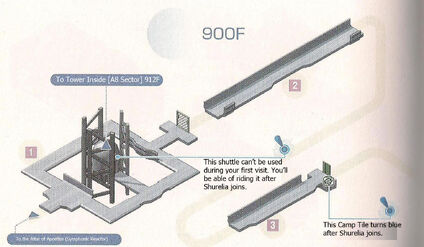 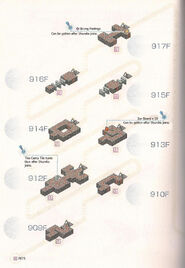 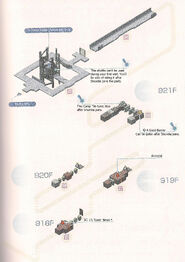 Several of the Camp Tiles in this area change from green to blue after Shurelia's awakening.

Retrieved from "https://artonelico.fandom.com/wiki/Tower_Inside_A7,_A8_and_A9_Sectors_900%7E921F?oldid=8106"
Community content is available under CC-BY-SA unless otherwise noted.