(Tower Inside [A3 Sector] 195~183F, 塔内【A3区画】195~183F?, lit. "tou-uchi [ei-san kukaku] 195~183efu")is one of the sectors of the First Tower of Ar tonelico, this one being located mid-way between Silvaplate and the Floating Wharf. This area can be accesed directly from the World Map by clicking on the Plasma Bell location, and it has two shuttles: one leading to Tower Inside A4 Sector 225F, other leading to Tower Inside A2 Sector 91F Center, and a Dividing Gate that leads to the Plasma Bell.

This was the section of the Tower to which Lyner Barsett, Krusche Elendia, Jack Hamilton, and Misha Arsellec Lune arrived after riding a shuttle from Tower Inside A4 Sector 225. The long stairwells began to impact heavily on their stamina, so Jack suggested to stop for a brief rest. During this time, Jack remarked on how the storm had ruined their plans, but Lyner then reminded him that they were fortunate to even have a way of reaching Firefly Alley. Misha began trembling, and when Lyner asked if she was okay, Misha replied that she was scared of dark places, which Krusche mocked by saying she was a klutz after listing all of her flaws.

Lyner didn't mind it, as he thought this made her more interesting to him, but Jack then said aloud that she was supposed to be perfect, because she was a Pureblooded β-type Reyvateil. Misha then explained that this was unlike the class system employed by the Church of El Elemia and Tenba: these were two of the known Reyvateil types, and after establishing that both Aurica Nestmile and Claire Branch were Third Generation Reyvateils, Misha then tried to explain what a β was, but ended being interrupted halfway through by Krusche, who remarked that she sounded quite conceited, and that only wimps and klutzes were βs. This made Misha quite angry, and she then proceeded to explain that βs were actually artificially created Reyvateils, using Shurelia as a rather distant basis called the clone master. She then explained that Third Generations were Reyvateils born from the union of a human and a Reyvateil, and that βs had the best singing power due to their pure blood. However, Misha then informed then she was the last of her kind, although βs once composed a 30% of Sol Ciel's population. After Misha called Jack a pervert for saying he would have liked to see all of those Reyvateils, Lyner suggested to continue their journey.

Further down, they found other controller similar to the one they saw in Tower Inside A1 Sector 1~3F, which brought back the memories of the bet that Krusche and Misha made back then, and Misha suggested using the Thunder Shot to power up the shuttle. Once they found the shuttle, they boarded it, arriving to Tower Inside A2 Sector 91F Center, which was pretty close to the Floating Wharf.

After Meimei informed them that Ayatane Michitaka was planning to destroy the Plasma Bell, Lyner and his friends, now accompanied by Shurelia, decided to go stop him. Upon arriving at this sector, Lyner began pondering on why Ayatane had decided to do this, but Krusche told him it was to destroy the world and Jack told him this wasn't time for thinking about things, so he had to keep these thoughts on the back of his head. When they stop to rest briefly during their descent through the stairs, Lyner announced he had an idea, and proceeded to explain it to the party.

He wondered if there was a way of saving Mir, which prompted the party to ask if he was crazy and if he was even listening to what he said. Lyner then explained himself: he initially thought that Mir was only a monster that lived to destroy the world, but after hearing so many stories and visiting so many places throughout Sol Ciel, he discovered that Mir wasn't evil and merely was blinded by a strong hatred towards the humans that created and used her as a disposable tool. Radolf Schnaizen then reminded him that they were trying to save the world. Lyner was aware of this, but he also wondered about the motivations and intentions of all the enemies they had fought before... Bourd Rade, Kyle Clancy, Ayatane... and he had already arrived at the conclusion that mere violence wasn't going to solve everything. Even if they defeated everyone that opposed them, the world wouldn't change at all. After all, although their enemies weren't honorable, he never took a moment to think about why they acted the way they did, how they felt over them, or even over what they fought; and if he had known these things, most likely they could have avoided fighting them. He then announced he had found the answer to Tastiella's riddle, and told the party that he wanted to make a peaceful world in which both Mir and Ayatane could coexist with them.

Shurelia told him this was quite unlikely, and remarked on how reckless he was, but despite Radolf's protests on this being impossible, Shurelia explained that while she knew Lyner was reckless, she wasn't going to stop him, and actually believed in Lyner's ideals. Aurica and Misha also placed their trust on Lyner, and after hearing that Krusche was also interested in creating a world with a new atmosphere, Jack and Radolf joined the enthusiasm, while also saying that they would stop the party if things got too dangerous. Lyner gave his thanks to the party, and Radolf advised to hurry up before Ayatane did something atrocious.

When they arrived at the floor in which the entrance to the Plasma Bell was located, the party was quite surprised to see that Tenba's search party, now allowed by Shurelia to explore the Tower, had discovered and arrived to this place. Ayano welcomed them, and showed the party their newest robot: the Ikaruga Mk. II, which made their explorations much easier. She then offered them to rest for a little while. However, when they tried to continue onwards to the Plasma Bell, they discovered that Ayatane had completely sealed the Dividing Gate, and neither Lyner or Shurelia knew of other routes to go inside, which prompted Jack to suggest breaking the door down. Krusche then had the idea of using the Ikaruga to do this, and asked Ayano for help. During this, the party remarked on how much Lyner had grown, and how different he was from the first time he had descended to the Wings of Horus. Ayano and Krusche returned shortly later, and brought the Ikaruga with them, which was now preparing to destroy the gate. However, Ayatane sent a virus to take the control of the robot, forcing the party to fight against it.

Once the party defeated it, the Ikaruga fell to the floor, began releasing sparks, and finally exploded, taking away the gate with him. Lyner apologized to Ayano for having destroyed the robot, but she didn't mind it, and told Lyner to hurry up and do whatever they needed.

This section of the Tower is mostly composed of the staircases that connect the twelve floors in it, although it also a few larger rooms. One of such rooms contains the switch that must be pressed in order to activate the shuttle that leads to Tower Inside A2 Sector 91F Center, while others have the two shuttles mentioned above, and the largest room has the access to the Plasma Bell. However, the exit to the world map and the entrance to the Plasma Bell will be locked until they party is required to go here during Phase 3. 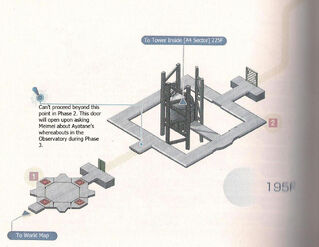 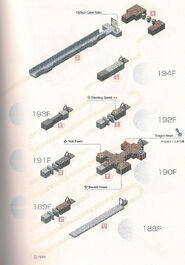 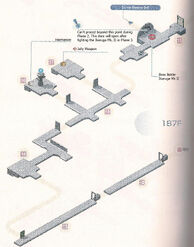 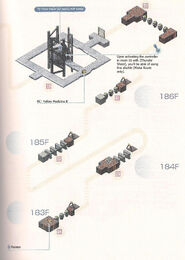 Number of Random Encounters in this Area: 15

Retrieved from "https://artonelico.fandom.com/wiki/Tower_Inside_A3_Sector_195%7E183F?oldid=8330"
Community content is available under CC-BY-SA unless otherwise noted.