(Tower Inside [A2 Sector] 91F ~ Floating Wharf, 塔内【A2区画】91F~滞空岸壁?, lit. "tou-uchi [ei-futatsu kukaku] 91 efu ~ taikuu kanpeki") is one of the sectors of the First Tower of Ar tonelico, and as the name indicates, it's also the place where the Floating Wharf, a sort-of airbus station located midway between Airport City Nemo and Firefly Alley, is located. The place has a shuttle that leads to Tower Inside A1 Sector 1F~3F and a Dividing Wall leading to Tower Inside A2 Sector 2F Center, and an exit leading back to the world map.

Lyner Barsett, Misha Arsellec Lune and Krusche Elendia arrived at this place after escaping from Firefly Alley. Upon arriving here, they witnessed the Tower Guardians causing havoc, which prompted Radolf Schnaizen, who was astonished to see them around here, to ask them for help in fighting the Guardians.

After the battle, Lyner explained why he was unable to return to the Church the day following their first encounter, and Radolf invited the party to ride the Church's airship back to Nemo. Krusche left the party since she had already fulfilled her goal of arriving to the Floating Wharf to pick up some supplies she needed to build airships, and told Lyner that they would see each other again, as he just asked Krusche to give a check to his airship, which was crashed in Viola Forest.

Lyner and Misha shortly later boarded the airship, and once there, Radolf told them the reason for the Church being in the area: they were on a secret mission, searching for an Hymn Crystal. This prompted Lyner to ask for clues about the Purger crystal, but Radolf replied that he didn't know much about the subject, and suggested asking Bishop Falss, as he was the true expert on the matter.

Shortly later, Misha approached him, showing off her fear of heights once again, while Lyner suggested to go inside to make the trip more bearable to her. Misha then asked if he had begun remembering her, but Lyner had to reply that sadly this wasn't the case. Misha then revealed that she was born in Platina and sent off to the Lower World in order to fulfill a certain mission, although she said this with a patent tone of bitterness. Aurica Nestmile then showed up, but before she had a chance of saying anything, the airship was intercepted by one of Tenba's own aircrafts, this one carrying Bourd Rade, the one who had knocked out and kidnapped Lyner previously, and his followers.

Lyner tried to oppose Bourd, but since he had taken Aurica hostage, he had no choice but to comply with his demands. Bourd threatened with throwing Aurica from the airship if Lyner tried to do anything and if Misha didn't go back to him, Radolf then arrived at the scene, but his attempts to defuse the situation only made it worse upon revealing that Aurica was a Reyvateil, which Bourd thoroughly despised and treated as slaves. Bourd then climbed to the top of the airship, prompting the three to follow him. Once there, Bourd forced Misha to walk alone to him, despite her fear of heights, and once she reached Bourd, he slapped Aurica and threw her off the airship, which made Lyner jump off to try to catch her. Lyner barely managed to do so, but was left hanging on one hand from the airship's border, and when he couldn't continue hanging on it, both he and Aurica fell.

Luckily, Krusche happened to be flying nearby, and suspicious of the fact that a Tenba airship had intercepted one of the Church, she decided to survey the situation, and ended catching both Aurica and Lyner. Lyner thanked her for the unexpected help, but Krusche then revealed that the airship had become uncontrollable, forcing them to make an emergency landing on the Falcon's Claw.

Later on, Lyner, Krusche and Jack Hamilton revisited this place while going the Tower to reach Firefly Alley, and while they stopped briefly on the Floating Wharf, the storm raging below the Wings of Horus made the wind unbearable, forcing them to go back into the safety of the Tower's walls.

This sector is even smaller than Sector A1 1F~3F, which mercifully compensates the long walk through the previous sector to activate the shuttle. The monster selection isn't much different either, although after arriving to the Floating Wharf, there will be a boss battle awaiting, so it's a good idea to make use of the nearby shop and Camp Tile. 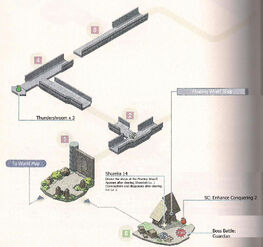 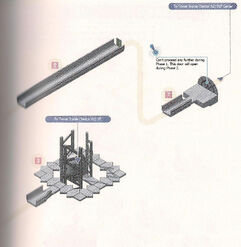 (2) Grathmelded Items. Become available upon being synthesized for the first time. Their Rank depends on the rank in which the player crafted them.

Retrieved from "https://artonelico.fandom.com/wiki/Tower_Inside_A2_Sector_91F_and_Floating_Wharf?oldid=10757"
Community content is available under CC-BY-SA unless otherwise noted.