The Terraced Fields (段々畑, dandanbatake?) are a small piece of land located at the very border of the Sea of Death, upon which vegetation has prospered, forming forests, and an small agricultural community was formed. Said agricultural community produces pretty much all of the food and raw materials that are used in the floating island of Firefly Alley, to which it's connected by an small pipeline.

The Fields also mark the lowermost accessible point of the First Tower of Ar tonelico to the people, since there is a door leading into Tower Inside A1 Sector 1~3F at its deepest areas. However, said door can only be opened by the Apostles of Elemia.

Upon escaping from Firefly Alley thanks to Spica's help, Lyner and Misha found themselves in this small community. However, shortly after their arrival, they met again with Krusche, who was about to be killed by a monster. Misha taught Lyner how to make use of the Ambience Fields, and through it, they and Krusche defeated the monster. Krusche then joined them to go the Floating Wharf.

Once they reached the deepest area of this area, Krusche told them about the door leading into the Tower, who no one could ever open. However, Lyner stepped in, making the Tower's security protocol, Meimei, appear. Meimei authenticated Lyner's data, and after Lyner pronounced an Hymmnos Spell command, the door opened before them, much to Krusche's surprise. Then, they proceeded inside.

This area serves as a brief respite from the extenuating escape from the Tenba Labs and the Firefly Power Generator due to having a more relaxing kind of environment, despite having some annoying enemies such as the Hulaflower.

However, despite this, the area doesn't give much trouble to traverse. Its entrance leads to both the world map and the Firefly Power Generator, while its exit leads to Tower Inside A1 Sector 1~3F. 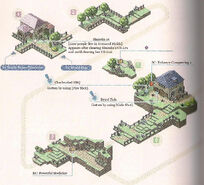 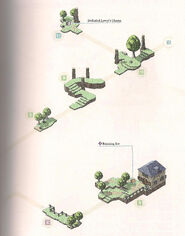 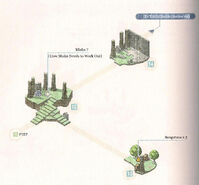 Terraced Fields Monster Map
Add a photo to this gallery

Retrieved from "https://artonelico.fandom.com/wiki/Terraced_Fields?oldid=13671"
Community content is available under CC-BY-SA unless otherwise noted.