The Tenba Labs (天覇研究所, tempakenkyuujo?, lit. "Tempa Laboratories") are a research facility built and maintained by the Tenba Conglomerate itself. It's located in the floating island Firefly Alley, and is connected directly to the facility that powers the island and keeps it afloat, the Firefly Power Generator.

Upon being knocked out by Bourd Rade and his underlings in the Airport City Nemo, Lyner Barsett was carried to and jailed in this place. After he awoke and noticed his current condition, Lyner heard someone calling out to him, and then, a girl picked the locks to his cell. The girl introduced herself as Misha Arsellec Lune, and while Lyner didn't seem to know who she was, Misha stated that she knew Lyner from a long time ago, and that she wanted to see him. They began their escape from the facility, stopping briefly to pick the Recipe Card to the Tranquility item, which Misha believed would become useful later on, and fighting against some of Tenba's security personnel due to Lyner blowing their cover after his rage got the best from him due to hearing how they treated the Reyvateils. It was in this battle that Misha told him about how fragile Reyvateils were, and the importance on Guarding them from the enemies' Stored Attacks.

During their way out, Lyner and Misha came across a certain door that was locked away, but which seemed to instill horrible images in Misha's mind when she was near it. Lyner decided that it wasn't a good idea to force Misha to go near this place, and decided to seek other way out. Finally, after picking a few locks, the pair ended reaching the exit to the Firefly Power Generator.

Later on, a party composed by Lyner, Misha, Krusche Elendia and Jack Hamilton was assigned to seek Misha's lost song, the Chronicle Key, and the first place they thought in which they could find it was in the Tenba Labs. However, upon reaching the mysterious locked door, Misha began freaking out again, and the party had to retreat back to Firefly Alley to come up with a plan. While Misha was sleeping, Krusche told them that the door was pretty suspicious due to having a large Symphonic Power line coming in, but no equipment running out of it, and that aside, it was emitting a wavelength that no Reyvateil could handle, and would likely kill her off if she was forced to go inside the door. Thus, Lyner suggested to go back and inspect the door without Misha's company.

However, they were unable to open or even make the door budge due to its locks powered by Symphonic Power, but Krusche had an idea: if they could shut off the Nuclear Power Generator, the doors would be out of energy and the locks would open automatically. After this discovery, they went back to Firefly Alley to pick up Misha.

Finally, after several problems, the party managed to shut down the Generator, which promptly opened the locked door and allowed the party to go through to the Tenba Tower.

The Tenba Labs could be considered as the first official dungeon in the game due to being the first indoors area in the game containing enemies. However, the enemies themselves aren't very strong and the Labs are easy enough to navigate, although they also serve as the entranceway to the Tenba Tower and the Reyvateil Workshop further in. 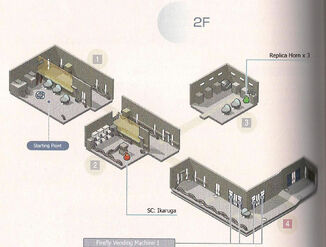 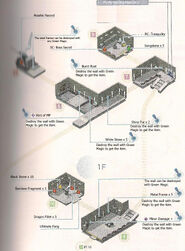 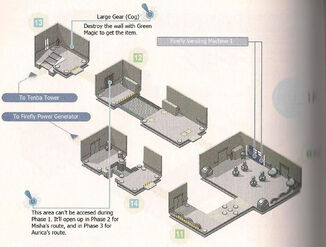 Tenba Labs Monster Map
Add a photo to this gallery

Retrieved from "https://artonelico.fandom.com/wiki/Tenba_Labs?oldid=13619"
Community content is available under CC-BY-SA unless otherwise noted.