The Temple of Elemia - Outer Wall (エレミア神殿外壁, Elemia Shinden Sotokabe?, lit. "Temple of Elemia - External Walls") is the outer section of the ruins of a former place of worship found in the Falcon's Claw, inside which a large statue of Goddess Tyria can be seen. As noted by its state of ruin and disrepair, it hasn't been visited by anyone during a very long time.

The Temple of Elemia used to the largest shrine to the Trio of Elemia found in Sol Ciel, and was called the Temple of Neo Elemia. This was the only place of the Right Wing of Horus to survive the collapse of said section of the Wings of Horus, and despite its ruined state, it still has vestiges of the wealth and prosperity in which the people of Neo Elemia used to live. This also was the place in which Mir was worshipped as the second coming of Goddess Tyria, despite not being treated as more than a tool.

Many centuries later, Lyner Barsett, Aurica Nestmile and Krusche Elendia crashed into the Falcon's Claw, and during their explorations, they found the ruins of the Temple. Aurica was greatly surprised to see a shrine to the Goddesses worshiped by the Church of El Elemia, which she also told to Lyner and Krusche.

Later on, Lyner, Aurica, Radolf Schnaizen and Ayatane Michitaka returned to the Temple to seek clues to the location of the Hymn Crystal Linker, which was reported to be in this area. Upon examining more closely the room in which the found the statue of Goddess Tyria, they noticed that there was a warp gate in the floor, but it was closed and non-functional because it required the application of Symphonic Power to be activated. Due to this, they went to visit Spica Neal at Firefly Alley, and upon paying her, she told Lyner and his party that they would need a device capable of delivering Symphonic Power to the gate, and thus, gave them a Boltapolta. With this, the party returned to the statue room, and upon using the Boltapolta, the gate opened, allowing them access to the deeper areas of the Temple.

Finally, upon Shurelia joining the party, they first came to this place to seek clues to solve Tastiella's riddle and learn more about Mir's past. Upon reaching the statue room, Shurelia explained to the party about the real name and purpose of the Temple, and how Mir used to be worshipped here, but as a mere tool instead of a person or deity.

Due to being the mere exterior part of the Temple, the Outer Wall doesn't have much complexity to its layout and pathways, although there are several doors and pathways that are covered in rubble, which can be destroyed which any kind of Green Magic to reveal the rooms and treasures behind. The room containing the statue of Goddess Tyria also has a warp gate that leads to the Center Area of the Temple, but it can only be opened in Aurica's route after reaching a certain point in the game, while it will remain permanently closed in Misha's route. 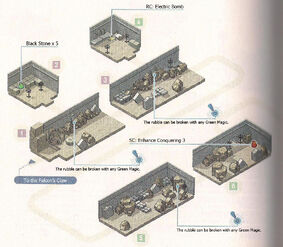 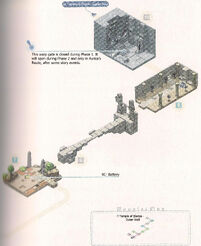 Retrieved from "https://artonelico.fandom.com/wiki/Temple_of_Elemia_-_Outer_Wall?oldid=13660"
Community content is available under CC-BY-SA unless otherwise noted.