Thanks to the help they received from Spica Neal; Lyner Barsett, Radolf Schnaizen, Ayatane Michitaka and Aurica Nestmile managed to open up the warp gate to this place using a Boltapolta, and promptly entered to search for the Hymn Crystal Linker, which was supposedly needed to revive the Goddesses of the Trio of Elemia.

After solving a few puzzles and battling some monsters that were around the place, Lyner and his friends stood before the altar holding the crystal, but they weren't allowed to grab it because it was guarded by a group of fierce dragons. Apparently, they took a liking at it because of its shine, and wanted to take it back to their nests. Lyner and his friends drove them back, and finally, they were able of taking it. Lyner encouraged Aurica to take the crystal because it was her dream to meet the Goddesses, and furthermore, she was now known as the reincarnation of Goddess Tyria. Aurica initially hesitated, because she thought something terrible would happen if she took it, but after both Lyner and Radolf reassured her, and told her that she had gained the right to do so, she finally held it above her head with pride, finally receiving a great boost to her shattered self-esteem.

Then, they returned to the headquarters of the Church of El Elemia in Nemo to report the wonderful news, unaware of the sinister plans that Bishop Falss had in store for them...

This part of the Temple has a much more labyrinthine layout, filled with dead-ends and with several sections that require backtracking due to the presence of switches that open doors, passages or reveal treasure chests upon being hit with an specific Green Magic spell, similarly to the Singing Hill. It also has a few secret rooms, so it's advisable to have the Analyzer Green Magic active while traveling through it. This dungeon is exclusive to Aurica's Route, since the warp gate leading to it is permanently closed in Misha's Route, and there's no way of opening it. 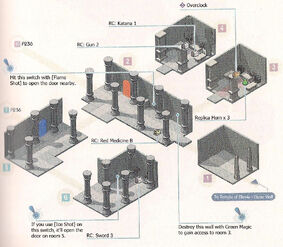 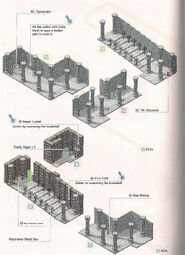 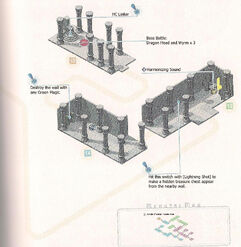 Number of Random Battles in this Area: 12

Retrieved from "https://artonelico.fandom.com/wiki/Temple_of_Elemia_-_Center_Area?oldid=13659"
Community content is available under CC-BY-SA unless otherwise noted.