The Tail of Reminiscence (追憶の尾翼, tsuioku no biyoku?) is a small area of the Wings of Horus, located at the point where both parts of the wings used to be connected prior to the Third Era. Currently it is covered by a large flower field with a memorial stone monument at its very end.

The Tail of Reminiscence basically serves as a memorial site for all the people who perished in the global catastrophe of the Grathnode Inferia. Formerly it used to have more memorial monuments, as well as a larger surface.

This also served as the favorite place to Shurelia, Rovar and Neath, since the three of them all loved the sky and songs, and the Tail was like a playground of sorts of them. It was here that they designed and tested a new type of airship, which also gave great interest to Shurelia in the world beyond the Sea of Death.

Rovar and Neath were in important political positions, and due to their power, Neath built an airport in this place in order to reinforce the aerial power of Sol Ciel and to promote expeditions to the outside world. However, both men ended in a disagreement when further building for the airport ended being suspended, and Neath then departed on a journey throughout the world, which ultimately caused his death when he tried coming back from Metafalss.

Neath's departure ended leaving large scars in Shurelia's heart, which caused her to come several times to the Tail to relax herself and release some of the emotions that were causing her so much pain. It was during one of these visits that she began eating some food she brought herself, and a Teru girl appeared before her. The girl was riding a broom, and asked Shurelia for some food, since she had been in search of a familiar for 70 days and her provisions had completely run out. Shurelia accepted, and then both began conversing during a long time, until the girl decided she had to go. Then she introduced herself as Tastiella, and gave Shurelia an instrument called a Pentangle so she could call her whenever she needed her help.

In more recent times, this was the place in which the ceremony for appointment of a new Star Singer was carried out, and as such, Misha Arsellec Lune, and some of the inhabitants of Platina were allowed to come down to this place, Lyner Barsett among them, although his father protested against this. This was the place in which Misha and Lyner said farewell to each other, and where Lyner promised he would become an strong knight to save her from the viruses.

Lyner and Misha returned to this place several years later to search for an ingredient necessary to repair Lyner's airship. Upon hearing that the ingredient was a Soleil Stone, Misha told Lyner that she knew where to find it, and told Lyner to go to the Tail. Upon arriving, Lyner was amazed to see such a beautiful place, to which Misha replied that he already knew, but just didn't remember about it, and that he most likely would remember once he saw the stone monument. When they reached the monument, Lyner remembered the day in which Misha and him said farewell to each other, and the promise he made. He then apologized to Misha for not remembering her and for not fulfilling the promise. Misha told him overjoyed that he already had done so by helping her recover her song and trying so hard to let her be free from her heavy duty. She then declared that this was her favorite place in the world. Misha also told him to just take a little bit of the monument in order to not damage it.

As noted outside, the Tail of Reminiscence is an small place, and as such, it doesn't require much traveling in order to fully explore it. This together with the relaxing music and appearance might make it somewhat of a breather between more complicated areas such as the Symphonic Reactor, the Crescent Chronicle, or the up-coming Blast Plate. This place can be visited in any route, but it has special importance in Misha's Route due to the reasons noted above in the History section.

It also has to be noted that this place can cause a game-breaking glitch if any of the scenes related to Misha are skipped by going through the text too fast or jumping to the monument while getting the Soleil Stone. If that happens, Krusche will disappear from Viola Forest upon completing the synthesis, making it impossible to progress any further in the game. 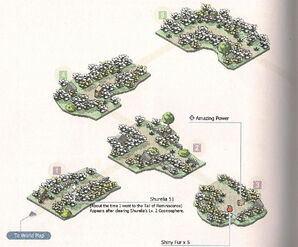 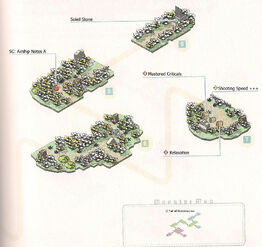 Number of Random Battles in this Area: 5

Retrieved from "https://artonelico.fandom.com/wiki/Tail_of_Reminiscence?oldid=15251"
Community content is available under CC-BY-SA unless otherwise noted.