The Skuwat Ruins (スクワート廃墟, skuwaatohaikyo?, lit. "Squirt Ruins") are the remains of Skuwat Village, the hometown for both Aurica Nestmile and Claire Branch, which are located at the east end of the Wings of Horus. Ever since it was destroyed six years prior to the events of Melody of Elemia, almost no people have visited this place, and it has become a monsters' nest.

This village was founded by inhabitants of the Left Wing of Horus some years after Mir's Rebellion had ended, in one of the pieces that broke off from the Right Wing and remained floating around the only remaining Plasma Bell. This place ended becoming a peaceful, yet isolated rural and mining community. Aside of their crops, the village produced an special mineral called Skuwat Metal, which due to its unique properties was perfect for making music boxes, which was another kind of business that flourished here.

However, in 3664 AD, this peace ended. Bourd Rade invaded this village shortly after kidnapping the current Star Singer: Misha Arsellec Lune, and began using its inhabitants as human shields against the Teru pursuing him. Jack Hamilton was stationed here as a temporary soldier from Tenba and fought here as well, losing one of his arms in the process. Due to the brutal battle, all of the village residents were killed, included both Aurica's and Claire's families, both of which were spared because they were out of the village at that moment.

Claire was distressed, but Aurica completely broke down upon learning about this, and both had to embark themselves in refugee ships to Nemo, where both took their own separate paths: Claire went on to join Tenba, while Aurica joined the Church of El Elemia.

When it came the time to repair Lyner Barsett's crashed airship to rescue Shurelia, who had been possessed by Mir, Aurica noticed that one of the ingredients they needed to create the Flipper was some Skuwat Metal, and immediately told Lyner that they could find it in her hometown, thus they departed to Skuwat Ruins. Upon arriving, Lyner was shocked to see the ruins of an once bustling village, to which Aurica added sadly that the place was completely deserted now.

Shortly later, they passed in front of Aurica's old house, and after apologizing for not being able to give Lyner anything, she invited him to go in. Lyner was amazed at the cleanliness of the place, and Aurica explained that she came once in a while to clean up, and she also wrote letters to her deceased parents and stored them in a drawer of the room, believing they could be alive due to not ever having seen any proof of their death, and that they someday would open up the drawer and read them. She then began crying in Lyner's shoulder from all the loneliness and sadness she had felt during most of her life. Aurica then showed Lyner the original Don Leon Claire had made for her, while Lyner agred half-heartedly that he was cute. Then they proceeded to go to place where the metal could be taken and took some of it with them. However, before returning to Viola Forest, they decided to stop by Claire's house. There, Aurica explained that Claire's father used to be the village mayor, and that Claire was the only true friend she had, and suggested visiting her in order to reminisce about the old times. Once there, Claire reminded Aurica about the time capsule they had buried near her house, and told her and Lyner to open it, since it could contain something useful for their journey.

They returned to Claire's house, and upon unearthing and opening the capsule, they were pleasantly surprised to see it contained a Recipe Card. Then, they returned to Viola Forest to continue with the repairs of the airship.

The Skuwat Ruins are basically formed by a long path that branches off several times to the left, and that taking it straight to the end leads to the area with the Skuwat Metal. Similarly to its counterpart from Misha's Route, the Tail of Reminiscence, the area serves as a breather between harder dungeons, although players that don't pay attention to what they are doing may encounter some nasty suprises due to the enemies. This area can be visited in any route, but it's only mandatory in Aurica's. 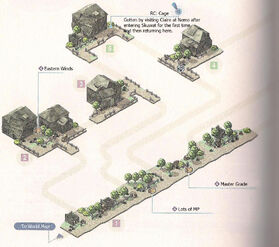 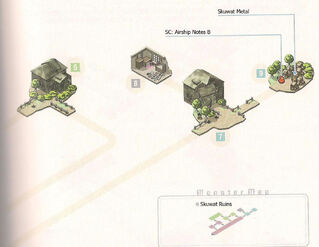 Retrieved from "https://artonelico.fandom.com/wiki/Skuwat_Ruins?oldid=13661"
Community content is available under CC-BY-SA unless otherwise noted.