Start a Wiki
The Silver Horn (シルヴァホルン, shiruvahorun?, lit. "Sylva Horn") is a machine that was entwined around the walls of the First Tower of Ar tonelico, and it took its name from the design it had during its planning phase. It's an extremely powerful device that was added several years after the First Tower was completed, and serves as the source of power that fuels Grathmelding.

During the Second Era, it was built to resurrect the Sound Science that was lost to the Grathnode Inferia, and the magic power service that it gave to the people brought forth a great prosperity. In the Third Era, Shurelia modified the machinery and put it into operation to allow the usage of a new technological system called Grathmeld. Thanks to the blessings of the Silver Horn, the world of the Third Era could grow very quickly. It's located around the middle regions of the Tower, where Em Pheyna and the Crescent Chronicle are situated. It serves as the penultimate dungeon to Ar tonelico: Melody of Elemia, and it's the place to which Lyner along with his party went to retrieve EXEC_HARMONIOUS/, the very first song that Mir crafted.

This place is characterized by being protected by an extremely powerful Symphonic Power energy field called the Voice of God, capable of killing any trespassers in question of seconds. Three valves located in the depths of the Horn control the flow of the Voice of God, and once they have been closed, the energy field disappears.

It's composed of several walkways and teleporters that interconnect the rooms where the three valves are located, and also, that connect to the Princess' Room, which was the place were Mir was imprisoned for most of her early life. It also houses a large organ, which served as the workshop in which Shurelia, and later on Mir, crafted their songs. This was too the place where the Hymn Crystal for Harmonious was sealed.

The Silver Horn is pretty much the final dungeon for Ar tonelico: Melody of Elemia, so it's a very labyrinthine place, filled with several crossroads, winding paths, and finally, the Voice of God, which depletes the party's HP per each step the player takes in the areas of its influence. To advance, the player first has to find and close three valves, which control the flow of Symphonic Power throughout the Silver Horn. Once this has been done, the Voice of God will disappear, and the player will be able to access the Princess Room after destroying an small door using the Sonic Shot Song Magic. 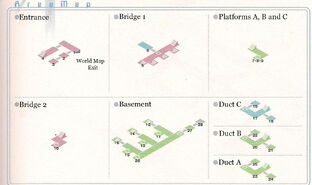 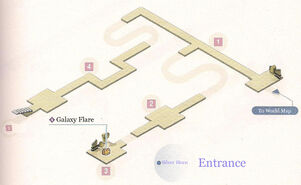 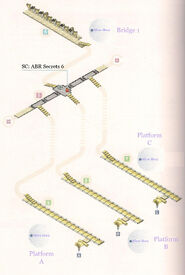 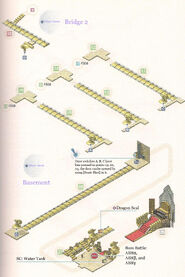 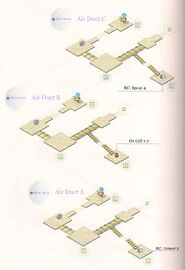 Silver Horn Map: Ducts A, B and C
Add a photo to this gallery

Although it doesn't physically appear in the game, the Silver Horn also makes an appearance in Ar tonelico II: Melody of Metafalica inside Jacqli's Cosmosphere, due to the important role it had in her backstory. It serves as a terrifyingly powerful device that Miros can use to destroy the world if Croix allows her to, and it also shows her memories as Mir, of when she first crafted her EXEC_HARMONIOUS/. song.

It also serves as one of Shurelia's strongest Song Magic, which harnesses the Horn's power to cause lightning elemental damage to all enemies, and is received from clearing her final Binary Field story.

Retrieved from "https://artonelico.fandom.com/wiki/Silver_Horn?oldid=15479"
Community content is available under CC-BY-SA unless otherwise noted.