Start a Wiki
Silvaplate (シルヴァプレート, shiruvapureeto?, lit. "Sylva Plate") is a location in the First Tower of Ar tonelico, and it's commonly the point used by travelers to begin their ascent through the Tower. The Plate is located at around the middle of the Tower, and it can be accesed from the outskirts of Airport City Nemo.

This was the point in which Lyner Barsett and his friends began their ascent of the Tower in order to return to the city of Platina, after he fulfilled his mission of retrieving the Hymn Crystal Purger. Before beginning to climb through the Plate, Lyner's friends gave him support after he apologized for involving them in this situation, while Jack Hamilton asked him if he was sure about this, and warned him to not be surprised if anything happened.

However, Bourd Rade, Misha Arsellec Lune and a few Tenba soldiers ambushed the party when they were halfway through the place. The entire party was irritated to see how Bourd was ordered to stop them from climbing the Tower, but it turned out to be that these weren't orders from Tenba, and Bourd boasted that once Mir was revived, all of the annoying organizations would disappear, and then decided to appease his anger by killing Lyner with his own hands. He then ordered Misha to begin singing, which she obeyed. Both Lyner and Jack were disappointed to see this, while Bourd mocked them.

Shortly later, Lyner and the others defeated Bourd and his underlings, leaving only Misha standing. Bourd ordered Misha to stop charging her Song Magic and launch it to the party, but Misha replied that it wasn't enough, and she needed a little more time. Bourd was enraged to see how Misha was disobeying his orders, and then Misha retorted that Reyvateils weren't stupid, and that she had merely been awaiting for a moment like this. Bourd understood at that moment what she meant, and began pleading for mercy, which went ignored when Misha launched her magic to him, throwing him down the Tower and triggering the collapse of the spot in which he was standing. The rest of the party rushed to her, and after apologizing to Lyner for making him worry, Misha began crying in his shoulder. After she calmed down, Misha revealed that Jack's true name was Harmonica, and began asking him all sorts of things, beginning with why his arm was mechanical now. Krusche then inserted herself into the conversation, showing she was concerned by Misha as well, but trying to hide it with the little bet they both had made when they were back in the Tower A1 Sector. Then, the party continued their climb.

When they reached the upper sector, both Aurica Nestmile and Misha began showing signs of fatigue, and Lyner decided to let the party rest for a while before continuing. Aurica apologized for being a burden, while Misha asked Jack if they would have to pass through Em Pheyna. Jack answered that they most likely wouldn't have any other option, and apologized for not saying goodbye to Misha when he left the town. The party continued their way, and when they reached the uppermost zone of Silvaplate, they encountered an split in the road. Lyner asked Jack about which would be the correct road, to which Jack begrudgingly answered that it was the right, arriving at the Pheyna Gate.

Due to the storm that was plaguing the Wings of Horus, Lyner, Radolf Schnaizen and Aurica went into the Tower to search for other road that would allow the people to go to Firefly Alley. Midway through Silvaplate, they were stopped by a couple of Teru guards, who told them that humans weren't allowed in the Tower. Lyner answered by telling them who he was, which caused the Teru to be astonished to meet in person the Knight of Elemia that was mentioned by their chief, and left them alone. Further up, the group encountered a Dividing Wall, and Lyner began doing all sort of things, and muttering crazy phrases to try and open it. Shurelia and Ayatane Michitaka emerged from the wall, and after asking Lyner what he was doing, Shurelia asked the group for help in repairing the Musical Corridor, which had been damaged by the viruses. The group accepted, since the Corridor's damage was the cause of the storm, and Shurelia made the appropriate changes to the access in the Corridor's door to allow them to go in.

A party formed by Lyner, Jack, Misha and Krusche Elendia was sent to Firefly Alley in order to find Misha's lost song, Chronicle Key. However, no airships were flying due to the storm and thus they ended stuck in Nemo. In there, Jack had heard a rumor saying that it was possible to go to Firefly Alley through a hole in Silvaplate, and taking this as their only chance, the group departed to that place. In there, they found a merchant, a knight from the Church of El Elemia and a soldier from Tenba arguing with some Teru guards because they weren't allowed to pass through, and when they were about the start fighting, Lyner told them to stop, and if they wanted to beat up anyone instead of solving this the peaceful way, they should beat up him. Due to this, Lyner got beaten up pretty badly, after which the soldier, the knight and the merchant went away, while the Teru apologized for having hit him. This left the party free to continue their way, until they reached the upper tunnel.

Misha wasn't expecting the Dividing Wall in this place to work, but surprisingly, the wall activated and Meimei appeared when Lyner got close to it. After recognizing his identity, the wall opened up, and allowed the party passage in the Tower Sector A4.

Silvaplate is the first among the dungeons that feature a long climb through a section of the Tower, which makes it to take quite a time to reach any of the exits that connect Nemo with Tower Sector A4 and the Ion Plate. Additionally, the enemies begin stepping in difficulty around here due to having more attack power and HP, aside of also having the highest number of encounters so far into the game. 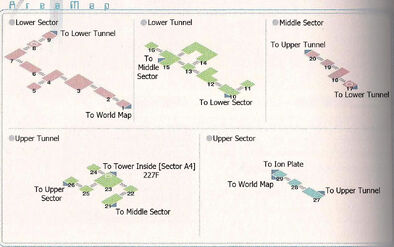 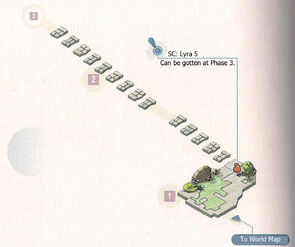 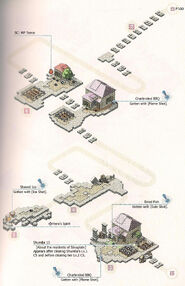 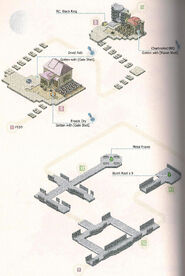 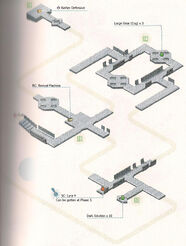 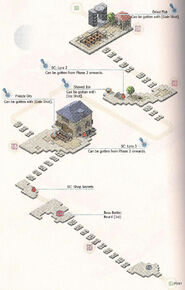 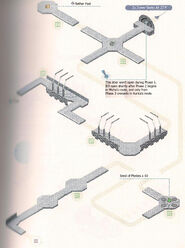 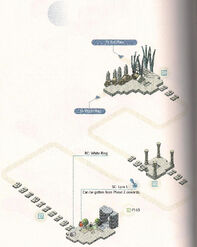 Silvaplate Monster Map
Add a photo to this gallery

Number of Random Battles in This Area: 10

Apparently, the name of the Plate (Silvaplate/Sylva Plate) is a reference to one of the three kingdoms that were once part of Sol Ciel, and which united to form the nation of El Elemia. This is supported by the fact that there's other plate with the same name as one of these ancient kingdoms (the Blast Plate). However, since there hasn't never been any confirmation or denial about the existence of a Valna Plate in the areas of the Tower below the Sea of Death, this is mere speculation.

Retrieved from "https://artonelico.fandom.com/wiki/Silvaplate?oldid=13666"
Community content is available under CC-BY-SA unless otherwise noted.