The Rinkernator (リンカーネイション, rinkaaneishon?, lit. "Reincarnation"), also known as Catwalk ~ Rinkernator (キャットウォーク~リンカーネイション, kyattouooku ~ rinkaaneishon?, lit. "Catwalk ~ Reincarnation"), is a facility located at the top of the First Tower of Ar tonelico, and it's the place where the Tower Administrator, Shurelia, spends most of her time. This place serves as a direct contact point for the Administrator with her Tower, and it also serves another purpose: by turning it off, the majority of the Tower's Symphonic Power and the systems powered by it will shut down, except for all the systems powered by the BIS, such as the SH Servers, the Plasma Bell and the Musical Corridor.

Since the Towers should always be running, there's no need to completely shut down their Symphonic Power supply except for when there's a change of Administrators, or when a thorough power supply recession is called for.

When there's a change of Administrators, one Reyvateil Origin is replaced by another. At this time, all systems must be shut down, or the entire Tower will suffer from multiple system errors.

The first time the Rinkernator is seen is at the end of Phase 1, when Shurelia uses an Hymmnos Spell to gain temporary access to the Cosmosphere of Misha/Aurica to disconnect them from the ELMA-DS that was invading her mind.

After this, the Rinkernator isn't seen again until Phase 2, in which Ayatane Michitaka appears before a shocked Shurelia, who made sure no one except herself could access this area. Ayatane asked what would she do if more viruses or Mir showed up now she was exhausted and alone. Sensing his intentions, Shurelia ordered him to reveal his identity in order to not be destroyed, to which Ayatane replies with his story: he was a soldier Shurelia had found lost in the Tower, and due to his great abilities, he was taken in by the Knights of Elemia. He also told her how much he admired her, but since this wasn't what Shurelia wanted to hear, he revealed his true form: an sparkle of light that ended knocking Shurelia unconscious, and left her surrounded by a black aura.

When Lyner Barsett and his friends finally obtained the FFT Divider and were on their way to confront Mir at the top of the Tower, Ayatane stopped them halfway through the catwalk leading to the Rinkernator, sad that they didn't heed his warnings, and telling them that he wasn't going to allow them to progress any further. Ayatane then remarked on his human stupidity, to which Lyner replied he was decided to save Shurelia, and told him to step aside. Ayatane apologized by saying he wasn't allowed to let anyone go through, and after it became clear that talking was pointless at this time, they had to fight him.

After the short but intense battle, Ayatane was shocked that they could have defeated him, and told seemingly to himself that, if he was destined to die, he wanted anyone else to kill him, so Lyner wouldn't have to see him like this. He then vanished into the air. Lyner was filled with grief due to this, but Radolf told him that this wasn't time for that, and told him they had to press on.

At the final steps that led to the Rinkernator, Misha/Aurica told Lyner how she felt about him, and about how much he had changed her life, while Lyner thanked her for being at his side, and for always helping him despite how hard the situation was. Then, they ascended the last stairwell to confront the Mir-possessed Shurelia.

Once there, Mir welcomed the party by calling them "cursed species", saying that humankind was pretty much done for with all the Guardians she had deployed throughout the world and the viruses she continued making. When Lyner asked her to stop, she merely replied saying she was making the perfect world, Reyvateilia, and that for its creation, humans had to be annihilated. Lyner initially tried to reason with Mir, to stop her without having to resort to violence, but after being initially shocked to this, Mir went to mock Lyner's ideals, telling him that he never thought before opening his mouth, and tortured him with the same energy rings she had used previously to imprison Leard. She then asked him if he thought that they could just stop fighting, that if he could create a world free of conflict, and if he was determined enough to throw away his life for it. She then replied that no human would be ever be capable of doing that, as history itself proved... and that nothing would calm the hatred she felt for humans. Lyner declared then that he wouldn't go easy on her, and stating that he would defeat her for the sake of everything in Ar Ciel.

Lyner initially asked Misha/Aurica to use to FFT Divider to take Mir out from Shurelia's body, but unfortunately the first attempt failed because Mir summoned a Guardian to shield herself from it. Mir was shocked to see they had found the Divider, but told them that she wouldn't fall so easily. After the party destroyed the Guardian, they were forced to confront Mir, now controlling the body of the personification of Ar tonelico herself...

After a hard and long battle, the party had weakened Mir enough to use the FFT Divider again, and launched it against Shurelia's body. Mir tried to summon a Guardian again to block it, but she did the summoning too late, and the Divider hit her, finally releasing Shurelia from her grasp. However, Mir manifested herself as her ultimate virus, Demon Mir, and attacked the party once again to continue with her plan of annihilating mankind. Shurelia was worried about Lyner and his friends, but Lyner stated that everyone else in Sol Ciel had given them their power and spirit, and he couldn't be defeated due to them having been brought up by these wishes to the top of the Tower itself.

After other grueling battle, Mir was vanquished, and the party celebrated their victory. However, this was short-lived, as Mir returned once again as a formless virus, declaring she had understimated her opponents, but that she wouldn't take it easy on them anymore, and would make a new world. Lyner asked if she was immortal, to which Mir replied that as long as the Tower lived, she would live. Lyner and the others were about to fall into despair, when Shurelia stood up and positioned herself in the center of the Rinkernator, asking Lyner to not be afraid, and remember that she was the Tower Administrator. She then asked Lyner if he liked this world, to which Lyner answered yes. Shurelia was glad to hear it, and told him that all of his experiences, and the people he had met had strengthened his spirit, and it would fuel a new world. Shurelia then said she was proud of having seen Lyner grow into such a fine young man, and that she would leave all of her hopes and wishes with him, Then, she began singing... Aurica felt the song was strong yet vain, but Mir began screaming: she had recognized the song was EXEC_SUSPEND/., the song that forced the shut down of the non-essential systems of the Tower, and told Shurelia that this song would mean her death as well. However, Shurelia didn't mind it in the slightest, stating she wanted to save the world.

After the song ended, Shurelia fell to the floor, with her Linkage armor now having vanished away, similarly to Mir's presence. No one in the party could believe their eyes, seeing Shurelia lying in the floor after having put the Tower into sleep mode. Aurica then remarked the air felt lighter for some reason, and Misha asked her to try singing her Song Magic. However, when they both tried singing, they got tired instantly and were unable to turn their feelings into magic, prompting Radolf to remark that the weren't blessed by the Tower anymore. The other party members agreed with him, while Krusche said that this was the dawn of a new era. Knowing they didn't have anything else to do, the party returned to Platina.

Months later, after finding the Re-Nation Hymn Crystal and climbing the Tower, the party climbed the Rinkernator once again, and there, Aurica began singing EXEC_RE=NATION/., thus reactivating the Tower once again. Upon awakening, Shurelia remembered everything that had happened, and yelled at Lyner for having awakened her, and reminding him of the consequences of having done this. Lyner told her he knew all about that, and that he also knew everything Shurelia had been done for the sake of the world, of how much she loved the world, and how wrong it was for her to be deprived of it and that no one gave a second thought to her sacrifice. Shurelia then replied that this wasn't excuse to allow Mir's return, but Lyner told her that Misha was singing again in the Crescent Chronicle to keep her sealed, and that after he told Misha to sing again, he thought if there wasn't a way for all them to be happy, without no one sacrificing their lives. Shurelia was convinced by everything that Lyner said, and upon saying how proud she was of him, she joined the party. Then, they returned to Platina to tell Leard about the current situation.

Similarly to Inferia, the Catwalk that leads to the Rinkernator is a mostly straight stairway from the S.P.U. littered with a few treasures on the side. However, this place has a couple of difficult boss battles, so it requires careful planning to be traversed. This place also serves as the final area for Phase 2, and depending on the decisions of the player, the game may end immediately after clearing it. 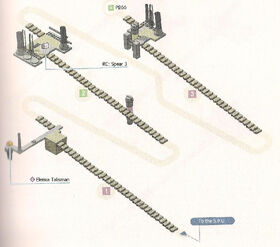 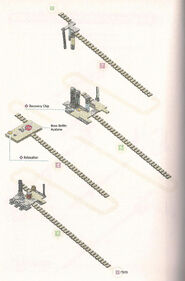 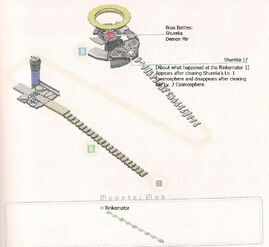 Number of Random Battles in This Area: 10

Retrieved from "https://artonelico.fandom.com/wiki/Rinkernator?oldid=13630"
Community content is available under CC-BY-SA unless otherwise noted.