The Plasma Bell (プラズマベル導入口, purazumaberu dounyuuguchi?, lit. "Plasma Bell Entrance") is the facility of the First Tower of Ar tonelico that generates the anti-gravity field that keeps the Wings of Horus afloat. Due to this important function, this is one of the facilities that won't be shut down even if the Tower is put into sleep mode. Likewise, it has assigned the strongest of the Tower Guardians to its protection: the Maid Droid Kanade, also called the Child of Light, although she is also the only being that could destroy it. Its entrance is located in Tower A3 Sector 187F.

The current Plasma Bell is only the remaining half of a set of two that was built in parallel to the Tower of Ar tonelico for the creation of the New Continent of Horus. The second Bell was the one that kept the Right Wing of Horus afloat, and it was under the protection of the Maid Droid Mai, Kanade's older sister. However, during Mir's Rebellion, Mai was taken over by Mir's viruses and was forced to destroy the Plasma Bell she protected, causing the collapse of the Right Wing and millions of deaths.

During the events of Ar tonelico: Melody of Elemia, Ayatane Michitaka came to this place under the orders of his creator, Mir, to destroy the remaining Plasma Bell. However, while he was hacking Kanade to reprogram her to destroy the Bell, Lyner Barsett and his friends arrived, and tried to convince Ayatane to give up on destroying the Bell and the Wings of Horus because they were too seeking a way for Mir to coexist with them. Ayatane accepted this, but told Lyner they were too late, and that Kanade had already been reprogrammed to destroy the Bell, thus forcing Lyner and the others to fight her.

When they finally defeated Kanade, she merely drew more Symphonic Power and increased her strength, prompting Shurelia to explain that she was indestructible and would only become stronger everytime she was beaten. Kanade then began charging an attack to wipe them out, but at that moment Ayatane reappeared and used his virus abilities to disable Kanade, erasing the reprogramming he had done and putting her to sleep. Ayatane then expressed the trust and friendship he felt for Lyner, and advised returning to Nemo in order to explain to them how to reach out to Mir. Before departing, though, Lyner put on Kanade the pendant that Meimei had given him, so she would know that her older sister was always looking out for her.

Lyner and the others later on returned to gauge their strength against Kanade, and after five victories against her, Kanade gave her access key to Shurelia, allowing the party to summon her whenever they needed Kanade's help.

Although there is one more dungeon coming after this, the Plasma Bell can be considered for all intents and purposes as the true final dungeon of Ar tonelico: Melody of Elemia.

Although the layout is relatively simple, being composed of several rooms with two exits, the place is littered with a large variety of extremely strong enemies, including the strongest monsters in the game, and the extremely rare Sera enemies. It also has the highest number of random encounters in the game, which can serve either as an excellent way of training the playable characters, or as a massive annoyance that merits the usage of a Peeka.

This place, as described above, is also the place where the game's special boss, Kanade, resides, who can be fought as many times as the player desires. She will reward the player with the possibility of summoning her as one of Shurelia's Song Magic after defeating her five times, although she will become stronger after every battle, and in fact, it's possible to fight against a version of her with max stats if the player continues fighting her during a long time. 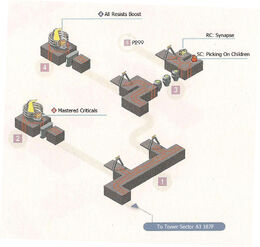 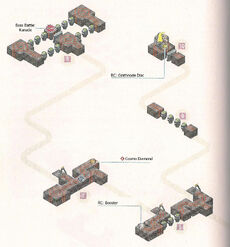 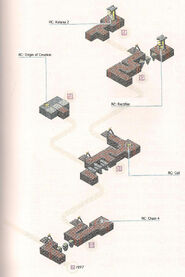 Plasma Bell Map 3
Add a photo to this gallery

Number of Random Battles in This Area: 99

Retrieved from "https://artonelico.fandom.com/wiki/Plasma_Bell?oldid=14918"
Community content is available under CC-BY-SA unless otherwise noted.