Start a Wiki
The Observatory (天文台, tenmondai?, lit. "Astronomical Observatory") is one of the facilities located in the uppermost areas of the First Tower of Ar tonelico, and it's situated halfway between the Blast Plate and the Prism Garden. As its name indicates, it's a location that serves for astronomical studies, which is why its equipped with cutting-edge techonology devices and a large telescope. There's also a large number of books in this place, as well as a Dive Machine, and it's here that the security protocols and authentication mechanisms of the Tower can be found, where they are supervised by the Maid Droid Meimei.

This place was chosen as the ideal spot for building an observatory due to being beyond Ar Ciel's atmosphere, which allowed an easier observations of the planets and stars without the visual obstructions and hindrances caused by light refracted by the air.

During the events of Ar tonelico: Melody of Elemia, Lyner Barsett and his friends arrived at this placed after passing through the Blast Plate, and inside its main room, they found Meimei peacefully sleeping. Lyner thought she looked somewhat familiar, to which Krusche Elendia replied that he didn't remember how many underaged girls he has asked to go in dates with him. Immediately, Meimei awakened, and got all flustered due to not noticing she had customers. She introduced herself, and then Lyner remembered where he had seen her: an hologram of her appeared everytime he autheticated at the Dividing Gates. She then proceeded to recite the logs of Lyner's recent acceses to the Dividing Gates, revealing she had an extensive catalog of the all the activity in the Tower, to which Misha Arsellec Lune replied that most likely she would know if Aurica Nestmile had been sneaking off to see Lyner at night.

Radolf Schnaizen then asked if there was anything in the logs about Shurelia, but Meimei replied that there wasn't any recent activity, revealing that Shurelia had deleted them. Lyner then asked about his father, Leard Barsett, who had been taken away by Shurelia at the Symphonic Reactor, and Meimei answered that he had recently accesed the S.P.U.: the room where the Tower's Mainframe was located. Upon learning this, Lyner and the others ran off from the room and began climbing the Prism Garden.

After rescuing Leard, they returned to the Observatory to begin tending his wounds, while he explained them about Shurelia's and Mir's current status. Leard didn't know how Mir came to posses Shurelia, but he did know the way to force Mir away from her mind: an special item called the FFT Divider, which was the reason for Mir taking him away. Said item was in the main room of the S.P.U., protected by the same shield of light that protected the Mainframe proper. However, it would be pretty difficult to obtain it due to the extreme power of the shield, which could kill off anyone that was exposed a few seconds to it, and Leard didn't know if there was a way of disabling it. Leard wanted to keep researching to help Lyner and his friends, but Lyner told him to rest a little, and that he had done more than enough at the moment. Leard remarked that swords maybe weren't as useless as he thought, and that having a family that looks for you is quite a nice thing to have. After Lyner and the others left, Lead muttered that he had never noticed how much Lyner had grown.

Later on, when Shurelia had joined the party, and they were traveling around the part to learn about Mir and find about Ayatane Michitaka's whereabouts, the party briefly visited Meimei once again here. They found her sleeping once again, and upon awakening, she happily notified them that she was full of Symphonic Power thanks to her naps. Shurelia then asked her about Ayatane's recent accesses, and Meimei answered her with the worst thing they could have imagined: Ayatane was currently at the Plasma Bell. Shurelia explained what was the Bell's function, and what would happen if Ayatane managed to destroy it, which made the party promptly board their airship and descend to the Wings of Horus as fast as possible. However, before they went, Meimei gave Lyner a pendant and asked him to give it to her younger sister, Kanade, who was the guardian of the Bell.

The Observatory doesn't actually count as a dungeon due to its small size and because of lacking enemies, so there isn't much to say about it. However, there's a note that can be added about it: room number 3 in the map has a semi-hidden lift in the center of the platform, which leads to a treasure chest containing an Aegis Protector Grathnode Crystal. 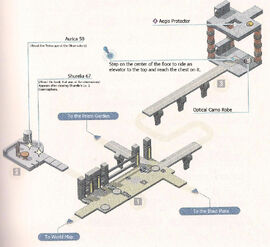 Observatory Map
Add a photo to this gallery

Retrieved from "https://artonelico.fandom.com/wiki/Observatory?oldid=13648"
Community content is available under CC-BY-SA unless otherwise noted.