Start a Wiki
Spoiler warning! The EXA_PICO Universe Wiki might reveal plot details about the series and its characters. Read at your own risk!

Nay is a main character of Ciel No Surge and a secondary character in Ar No Surge. While she first introduces herself to Ion as a cheerful and cute admirer, she hides a complicated and troubled personality and past beneath the cute apperance...

She was the original Ionasal.kkll.Preciel, the Tenmon Empress Candidate, but lost her position and original body when Fractel removed her soul for the transmigration to give the body to the Current Ion on her own father Revelt's orders and then her soul is then placed in a vaccum tube to be disposed off. However, Fractal instead placed her soul in a sharl body of her own creation, synchronized with her to sustain Nay's lifeforce and tried to escape with her.

Unfortunately, their escape is discovered by the Tenmon and she is forced to sacrifice her life by distracting their pursuers in order for Nay to escape, to the later's great sorrow and despair. Nay then managed to reach Palace Nyurokiel but while she managed to avoid detection from the PLASMA agents searching for her(under orders from Revelt to kill her without mercy), it seemed inevitable that she would soon be discovered and (Without Fractel to synchronize with her, she only has a another day left to live) when she is suddenly abducted by thugs and brought to Zillillium Rimonite.

Surprised by the fact she discovered the real Ion, she offered the frightened and sorrowful Nay with a deal: In exchange for her cooperation, she would be able to find a way to sustain her dharl body and most importantly regain her original body and gain revenge against the Tenmon and the one who stole her original body. With everything taken from her, she accepts although she doesn't fully trust her.

In between assisting Zill with her plans, she made her residence in the Planetary Maison and managed to become a popular singer and idol, becoming the highly popular "Pretty Berry".

Zill sends Nay to the Dreamsphere in order to have her bring Ion to her by taking her to Neptool while at the same time warning her to be wary of him.

She then meets Ion, who is currently under the residence of Pari, the Tenmon Representative of the Dreamsphere colony and mananges to gain her trust as a friend, even able to accompany her in spying Kanon's residence. She later saves Ion from Neptool's plot to frame her for his assassination attempt on Kanon although mostly out of concern for her original body.

After Kanon destroys the cielnotrons of the Tenmon Dreamsphere citizens and Ion is left with no where else to go, she offers her to travel with her to the Planetary Maison, to the ire of Neptool who wanted to bring her to the Tube Company.

Role in Ar No Surge: Ode to an Unborn Star 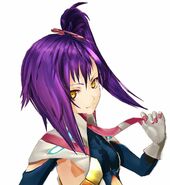 Add a photo to this gallery
Retrieved from "https://artonelico.fandom.com/wiki/Nayaflask?oldid=18458"
Community content is available under CC-BY-SA unless otherwise noted.