The Musical Corridor (彩音回廊, Ionkairou?, lit. "Ion Corridor") is a mechanical system that was planned when the First Tower of Ar tonelico was still in construction, and it was built upon its completion with the purpose of being a controller to keep the temperature, atmospheric pressure, and gravitational fields around the Tower stable, as well as simulating all the atmospheric conditions found at 0 meters above sea level inside its range of effect. There is a console called the Central Controller, which actually only sends the energy and signals necessary to control each one of the 7 floating discs that surround it, called the Hexagonal Plates. The Plates orbit the place in which the Corridor itself is located: the Ion Plate.

After an storm started in the Wings of Horus as a consequence of Mir forcing one of the Hexagonal Plates to collapse, Shurelia and Ayatane Michitaka contacted Lyner Barsett, Aurica Nestmile and Radolf Schnaizen in Silvaplate for help in repairing the Musical Corridor.

Upon arriving at the central console room, Ayatane explained that Aurica's help would be needed here, since only Reyvateils could control the Corridor. Aurica then entered into the console and it promptly activated itself, showing a background of a blue sky behind them. Aurica instinctively knew what she should do, and began recalibrating the systems of the Corridor, although in the end she was unable because of the lack of one of the Plates, which made impossible to properly balance the light among the six remaining ones. Ayatane reassured Aurica that this wasn't her fault when she considered herself as useless, and after explaining the group what they should do, they stepped into the warp gate leading to the Plates.

Once there, Lyner was amazed to see how the inside of the Red Plate was completely red, and Ayatane explained about the existence of the seven plates and their corresponding colors, as well as telling them how the manipulate the mirrors in them, the Photon Glasses. He also gave them a Recipe Card for repairing the mirrors in case they broke them accidentally.

After they finished readjusting the mirrors, they returned to the central console room, and Aurica tried to rebalance the Plates once again. However, this time she was taken over by Mir and her viruses, which Ayatane had to destroy by showing again the same special power he used in the Symphonic Reactor during ELMA-DS' first appearance. This wasn't enough to end the problems, since the viruses managed to summon a few Guardians before being destroyed that Lyner and the others had to fight.

After they won the battle, Shurelia rushed into the scene, and upon learning what had happened, she entered into console personally and made the necessary repairs to Corridor, finally wiping out the storm that had been plaguing the Wings of Horus. However, this left Aurica quite depressed, and her sadness only got worse after Shurelia told them she maybe have been the cause of these problems because the viruses had manifested through a hole in her Soulspace, which needed Diving to be fixed. Aurica regarded herself as a defective doll, and her mood didn't improve at all, no matter what the others tried to say. Shurelia thanked the group for their help in the restoration of the Corridor, and asked Ayatane to accompany them for some more time.

Lyner and the others asked about Ayatane's mysterious power, but he requested them to keep them as a secret, while Radolf was glad to have another experienced fighter alongside them. Upon exiting, they noticed the disappearance of the storm, and decided to go back to Nemo to report their success to Bishop Falss.

The light circuits are a system that controls the flow of the light from the Tower's surface to the Central Console, located inside the Tower itself. The light of the sun is refracted by using a large crystal called the Prism, while a Lens amplifies and redirects the light in a way it reaches the center of the Tower. The Prisms are installed in various areas called the Prism Rooms, and each one of them is connected to a Upper Prism Room through special light lines, which transmit the light from a place to other. The light is then concentrated in the Prisms of this room and sent to the lower part of the Central Console. Upon receiving these light beams, the console becomes capable of analyzing and automatically controling the current temperature, humidity, and atmospheric pressure.

The Musical Corridor is located in the outer walls of the Tower, and around of it there is a system composed by 7 equal parts called the Junctions. They are made up from the seven Hexagonal Plates, and each one accomplishes an specific function according to the signals sent to them from the Tower.

However, there is an exception to this: if one of the Plates was removed by any reasons, the balance would have to be restored so this system could continue fulfilling its functions. At the present time, the Musical Corridor only has 6 Hexagonal Plates because one of them collapsed, breaking its Junction with the other 6 ones.

This is the mechanism that regulates the functioning of the seven Hexagonal Plates. The position of the Hexagonal Plates is always decided according to the relative positions of the Junctions themselves. However, the Tower is very sensitive to even the smallest distortions that may arise between it and the relative position of the planet, and it's not able to measure these calculation errors. The Balancer is a system that is constantly calculating these distortions, its official name being the Tridimensional Mutual Relative Correction Gyroscope. It always calculates the gravitational fields, and in the case that a distortion appears, it sends a signal to the Plasma Bell to initiate the correction of said distortion.

The Central Console of the Musical Corridor is connected to the Junctions by a network of seven electrical cables. These cables are of extreme importance because if even one of these was cut off, the Plates would fall, making it impossible to control the weather, so they are protected by a very strong cover. The Router Buses are the protections that these cables have, which is essentially a Yuteria cover wrapping the cable. The Yuteria is a metal that was created in the ancient civilizations, and its lighter and harder than ceramics.

These are the seven plates that surround the Tower, also called Resonance Boards, and the directionality that their waves have depends on the vibrations of each of them. Upon a fixed point, they concentrate the Dynamic D-Waves they produce, and then, these waves begin resonating with other, said resonance being the factor that allows the controlling of the temperature and the level of humidity. This also allows to control the apparition of the clouds and the clearing of the storms. Usually, the output of the waves is so low that even in the point of concentration, they can't be seen by the naked eye. However, when the limiter is turned off and the vibrations turns limitless, the point of concentration is forced to resonate so intensely that it can even produce plasma.

Aside of the central console room, the Musical Corridor is formed by the rooms contained inside the remaining six Plates, and are interconnected to each other via a series of warp gates. To accomplish the goal of repairing the corridor, the player has to change the direction of the mirrors located in the central room of each Plate using the Gale Shot Green Magic, so the light travels through them in an specific way, and in an specific instance the mirror must be destroyed with the Flame Shot. The route the light must follow is the following: Red -> Orange -> Yellow -> Green -> Blue -> Reddish Purple. If the player accidentaly destroys other mirror beyond the one required, it will have to Grathmeld a new one through the Photon Glass Recipe Card given by Ayatane at the beginning of this section.

As a final note, the Musical Corridor is exclusive to Aurica's Route due to the following reason: while the central console room can be accesed in Misha's Route during Phase 3, the warp gates leading to the Plates are permanently closed, and so it isn't possible to explore them in said path. 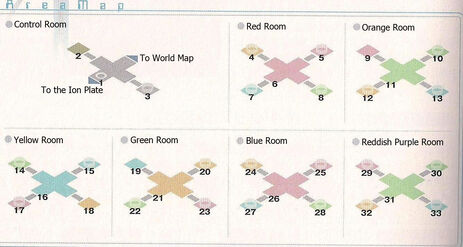 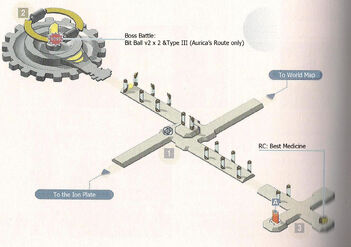 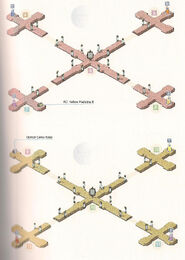 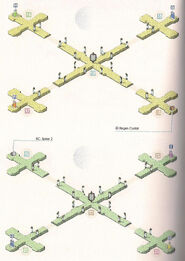 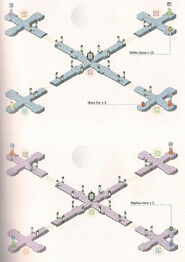 Musical Corridor Monster Map
Add a photo to this gallery

As it can be inferred from the height at which the people live in Metafalss and Sol Cluster, each of the other Towers have their own weather control systems, all of them similar in nature to this Musical Corridor: the Wings of Hynemos in the Second Tower of Ar tonelico, and the Musical Corridor in the Tower of Harvestasha.

Retrieved from "https://artonelico.fandom.com/wiki/Musical_Corridor?oldid=13627"
Community content is available under CC-BY-SA unless otherwise noted.