"You love this world more than anyone else. It's not right for you to be deprived of it..."
—Lyner—

Lyner Barsett (ライナー・バルセルト, Rainā Baruseruto?, lit. "Lyner Barsert") is the protagonist of Ar tonelico: Melody of Elemia, the first game in the Ar tonelico series. He is the son of Leard Barsett, the governor of Platina, the most important city in the region of Sol Ciel that is situated at the upper levels of the Ar tonelico Tower, and has access to the local government as well as much of the tower. He also seems to be quite adept at speaking and understanding the Hymmnos Language.

Though expected to follow in the footsteps of his father, he instead chose to join the Knights of Elemia, a group of soldiers who protect Platina and serve directly under Shurelia, the Tower Administrator. He serves under her in the same squadron as his best friend Ayatane, who joined at the same time as he did. However, despite the high position he holds, he still displays many actions befitting the teenager he is, such as being very impulsive and showing a rebellious streak at times when anyone who is not Shurelia tries to give him orders.

He also seems very selfless, willing to go so far as to put his own life in danger to protect everyone, not caring about the risk. He often argues with his father about his choice to become a Knight of Elemia, as his father wants to see him go into politics and succeed him as governor of Platina, but by the end of the game Lyner manages to make Leard realize that such a thing will not happen.

Spoiler warning! The EXA_PICO Universe Wiki might reveal plot details about the series and its characters. Read at your own risk!

Lyner's adventure begins when Platina is attacked by an unknown form of virus that is seemingly undefeatable, and after Ayatane seemingly sacrifices himself to try and hold it off from destroying the Ar tonelico tower, Shurelia sends Lyner to the Lower Lands to retrieve a hymn called Purger to get rid of the new virus. She entrusts to him to an aircraft, also giving him a Hymn Brooch which produces a 3D image of the Purger crystal he is to seek; he promises to bring it safely back to her, then begins his journey to the Lower Lands. As he is flying, his aircraft is attacked by a monster - he wonders aloud if it is some sort of monster from the Blastline - and he is forced to make a crash landing in the Lower Lands when the aircraft is badly damaged, presumably thrown free of the craft from the impact.

It is while he lays unconscious in a forest shortly after that Aurica Nestmile, a Reyvateil that was stationed in the nearby Karulu Village, finds him, having seen the falling craft and immediately rushed off to see what had happened. She heals Lyner using her Song Magic and then runs away before he can awaken and see her, though she drops a handkerchief in her hurry; when Lyner wakes and manages to get up, he finds this handkerchief, and later presents it to Aurica, vaguely remembering seeing her standing over him and healing his wounds. She insists the handkerchief is not hers, however, and once more runs away, leaving Lyner confused.

In order to prevent his crashed airship from being sold to the Tenba Conglomerate, Lyner is soon forced - along with the help of Jack Hamilton, a wandering gunman who seems to know who Lyner is for some reason - to destroy the Blue Wolves that are in the Cello Forest, blocking access to the city of Nemo. Upon finding the Blue Wolves and trying to attack them, Jack realizes all attacks but fire attacks are useless, and orders Lyner to retreat to the Karulu inn, where they regroup and Jack recommends that Lyner learn about Grathmelding in order to create Missiles to destroy the Blue Wolves with. Lyner then goes to see the city's top grathmelding expert, an old man called Pochoma who teaches him how to meld and gives him a recipe card for a healing drink; from then on out, grathmelding can be performed at any inn or save ring. With the old man's help and the gift of another recipe card, Lyner is able to meld the Missiles needed to destroy the Blue Wolves, and with the promise of Karulu Village's mayor to keep the airship safe, he and Jack then set out for Nemo to find someone to repair the damaged machine.

In Nemo, Lyner meets Aurica again; she aids him for a battle against a maintenance robot that is recklessly attacking the townspeople, seeming very surprised to find her own song magic is much stronger than even she had known; after the battle, they are interrupted by Radolf Schnaizen, a cardinal for the Church of Elemia who was impressed by Lyner's skill. He speaks to them for a moment and asks Aurica to show them to the inn; she agrees, but soon runs away, saying she will meet them at the inn, when Jack becomes uncomfortable from her "gloomy" (in his words) presence. Lyner berates Jack, but there is nothing they can do but head to the inn and allow the now-uncomfortable Aurica to secure a room for them.

With their room secured, Jack and Lyner get into a discussion about what types of girls they like, which seems to make Lyner very uncomfortable; Jack then sees Claire Branch, who later turns out to be a friend of Aurica's, enter the inn, and drags Lyner down to the bar so that he can talk with Claire, who turns out to be the bar's owner. Feeling left out, Lyner simply hangs back and listens, but is soon confronted by Bourd Rade, the second-in-command of the Tenba Conglomerate who seems to have something against Lyner, asking him to step outside so they can talk privately. With some misgivings, Lyner obediently goes outside to the Song Stone Park to speak with Bourd, where he is given a choice - either join Tenba, or die. He swears he will never join Tenba due to their mistreatment of Reyvateils, and is forced to fight Bourd and some of his flunkies, who quickly overpower him and knock him unconscious, taking him back to Tenba's base and locking him into a cell, meaning to force him to work for them until he either dies of overwork or agrees to join them.

It is while Lyner is imprisoned that Misha Arsellec Lune, a young Reyvateil that seems to know him, finds him and frees him from his cell, greeting him warmly and with some surprise; it is soon revealed that he does not remember her, however, which upsets her greatly, but she still agrees to help him escape after they are forced to fight a Tenba guard who comes to see what the commotion is about. They fight their way through to the outer perimeter of the base, where Lyner hears an explosion from below and promptly goes to see what's happening, forcing Misha to follow him though she complains he's going to get them killed.

Below, they see Krusche Elendia facing off against a virus-infected machine; Lyner quickly jumps in to help her battle it, as does Misha (though with some misgivings), and together they manage to take it down. Bourd then shows up again with some more of his flunkies, and Lyner and Misha manage to escape him this time; he plots to have them captured when they return to Nemo, determined more than ever to turn Lyner to his side or kill him and angry with the betrayal of Misha, who he calls a "useless doll" before she and Lyner escape, once more upsetting her.

When they escape Bourd, Misha asks Lyner why he seemed to recognize the wolflike creature that had been near the machine; Lyner explains it was the same sort of virus that appeared in Platina, which makes Misha nervous for some reason, but she won't tell him what it is and pushes him to hurry up and get them out of there. They manage to get out of the base successfully this time, Misha picking various locks along the way to aid their escape, and end up in Firefly Alley, which Misha explains as the best place to try and find someone to repair Lyner's airship.

Due to being the main character, Lyner can never be taken away from the main party, but there isn't really any reason for considering that, as he has pretty good stats, and is balanced in all areas, although using Enhancements to raise his already good combat capabilities woulnd't be a bad idea. He is also the only character capable of using one of his non-passive skills without raising Harmonics levels.

Impulse - Throws a wave of wind to one enemy, for a total of two hits. Causes physical and wind-elemental damage. Lyner knows it from the start. HP consumption per use: 10%

Double Beat - Tackles the enemy, and then, lets a surge of energy hit one enemy various times for damage. Hits a total of five times, each hit causing physical damage. Learnt at Lv. 30. HP consumption per use: 20%

Break Blade - Charges and slashes the enemy repeatedly with the sword, for a total of six large physical damage hits. Puts Lyner very back in the turn list after being used. Learnt at Lv. 40. HP consumption per use: 30%

Shield of Bond (Passive) - Reduces by half the damage taken while Guarding a Reyvateil. Activates randomly, having higher chances to activate the higher Lyner's level is. When activated, the characters are covered by a solid white barrier. Learnt at Lv. 20.

Photon Storm (Super Counter) - Raises one enemy into the air with a spiral of electric energy. Lyner then strikes it repeteadly with his sword, and finally slams the enemy down into the ground while throwing it a dragon-shaped lightning bolt. 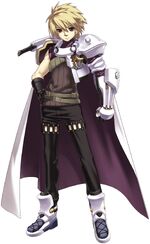 Add a photo to this gallery
Retrieved from "https://artonelico.fandom.com/wiki/Lyner_Barsett?oldid=16440"
Community content is available under CC-BY-SA unless otherwise noted.