(Kyle's Library, カイエル書庫?, lit. "kaierukosho") is a secret library found in the basement of the main HQ of the Church of El Elemia, located in Airport City Nemo. It was in this place where Kyle Clancy carried out his schemes and research to revive Mir, and is filled with the entries of his personal diary.

After he faked his own death, Kyle Clancy went to live to Nemo and became a member of the Church of El Elemia, gaining the position of Bishop under the name Falss when he showed his knowledge and skills to everyone else in the Lower World. It was during this time that he established a secret library in the basement of the Church in total secrecy, leaving this place hidden during all of his lifetime.

During the events of Ar tonelico: Melody of Elemia, Radolf Schnaizen, who succeeded Falss as Bishop after the latter was killed at the Symphonic Reactor, was the first one to discover this place, and reported it right away to Lyner Barsett and his father, Leard Barsett, at the city of Platina. Radolf believed that this place could hold some clues to the whereabouts of the Hymn Crystal Re-Nation, which they needed to revive Shurelia, and thus they decided to investigate it.

Once inside, they found Kyle's study at the deepmost room, which also contained a mysterious black chest. Lyner and his friends thought that the chest could contain the crystal, but they were unable to open it. Still, they found a paper stuck on the lid, which had written "note column of 7/2/3770..."

Upon checking up the diary entry of that date, Lyner noticed that the first letters of the column spelled "bookshelf", and thus, they decided to examine the bookshelves around the library. Doing so, they found a secret passage, which led them to another bookshelf that had some Hymmnos letters written in it. Radolf noted it could be the code used to open the chest, and thus, they returned to Kyle's study. Once there, Lyner said the phrase "Ma ki ra cenjue pak sor", which instantly opened the chest and allowed them to claim the Re-Nation crystal. They then left the library and went to the Inn in Nemo.

Despite being a dungeon, this place doesn't have any enemy encounters, which just leaves the players to decipher and solve the puzzle necessary to open up the chest. However, it might be somewhat complicated to solve without prior knowledge or help, due to how vague the clue for finding the hidden passage is. 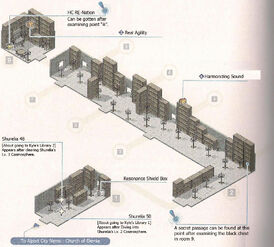 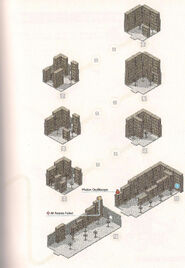 Kyle's Library Map 2
Add a photo to this gallery

Retrieved from "https://artonelico.fandom.com/wiki/Kyle%27s_Library?oldid=7786"
Community content is available under CC-BY-SA unless otherwise noted.