Start a Wiki
The Ion Plate (イオンプレート, ionpureeto?, lit. "Ion Plate") is the first section of the Tower located right behind the Pheyna Gate, making it a path that few have traversed since the start of the Third Era. This place is located in the nimbostratus, making storms and lightning flashes something common, and it also houses the entrances to two of the most important facilities to the inhabitants of Sol Ciel: the Musical Corridor and the Crescent Chronicle.

This area was traversed several times by Lyner Barsett and his friends to reach different areas of the Tower, at least until they acquired the airship Gungnir. The first time they did it was to go back to Platina after obtaining the Hymn Crystal Purger, while the second one was returning to the Wings of Horus for some specific reason, depending on the route chosen at the start of Phase 2.

The Ion Plate has quite a simple layout and is quite an straightforward place, making its exploration a relative breeze. However, there is a path hidden in the second screen leading to some useful items, as shown in the maps below. Likewise, while it also serves as a crossroads of sorts between Em Pheyna, Silvaplate, the Crescent Chronicle, the Musical Corridor, the Tower Sector A5 and Inferia, most of the exits leading to these areas are closed off during the first trip around the place, which also simplifies the route the player has to take to continue advancing in the game. 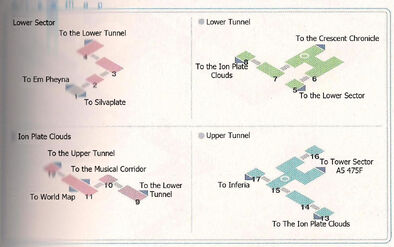 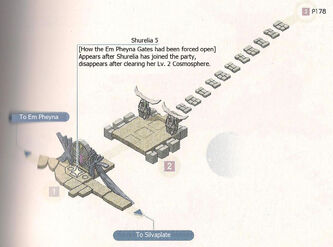 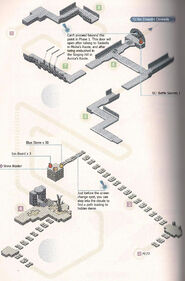 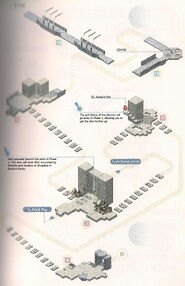 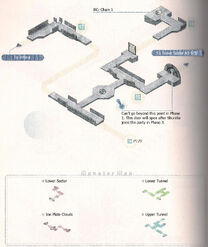 Number of Random Encounters in this Area: 8

Retrieved from "https://artonelico.fandom.com/wiki/Ion_Plate?oldid=13610"
Community content is available under CC-BY-SA unless otherwise noted.