Start a Wiki
Spoiler warning! The EXA_PICO Universe Wiki might reveal plot details about the series and its characters. Read at your own risk!

Delta "Tabou" Lantanoil is a supporting character in Ciel nosurge: Ushinawareta Hoshi e Sasagu Uta and a recurring character and main protagonist in Ar Nosurge: Ode to an Unborn Star.

While in Ciel nosurge he's a little kid who becomes Ion's first friend after she started the Imperial Succession Trials.

In Ar nosurge he is a grown man that used to be part of the PLASMA special forces team until an incident that took place about half a year prior to the game's story caused him to be fired. He runs a small restaurant in Felion called "Cook de Delta".

While he is quite headstrong and stubborn, lacking also in discernment and tact in many occasions, his bravery and determination are second to no one. He also feels very strongly about his childhood friend Casty Riernoit, and will go to end in order to protect her. 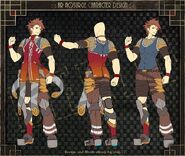 Add a photo to this gallery

This article is a stub. You can help EXA_PICO Universe Wiki by expanding it.

Retrieved from "https://artonelico.fandom.com/wiki/Delta_Lantanoil?oldid=17025"
Community content is available under CC-BY-SA unless otherwise noted.